When using CAESAR II with network licensing, your company name does not automatically appear in the output reports generated by the program. Instead a message saying ‘Edit company name in <system>\company.txt’ is shown in headers:

The same message appears at the foot of the main program window (the initials SPLM stand for Smartplant License Manager.)

Select the ‘Utilities’ tab on the ribbon menu. Click on ‘Open System folder’.

A Windows Explorer window will open at the CAESAR II system folder location.

Scroll down to locate the file Company.txt and double-click to open it. The file will look like this:

Select the text on the first line and type in your company name to replace the existing text.

Save and close the file and close Windows Explorer. The next time you generate an output report you will now see the text which you entered at Step 2: 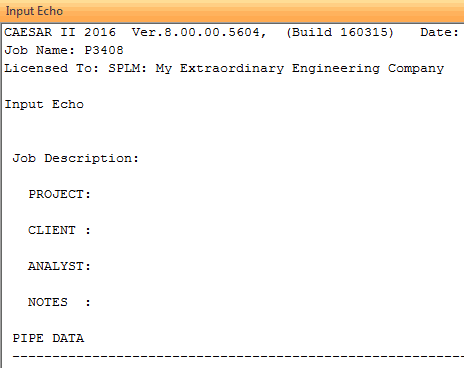 The text at the bottom of the main window will also update on the next time you restart CAESAR II.