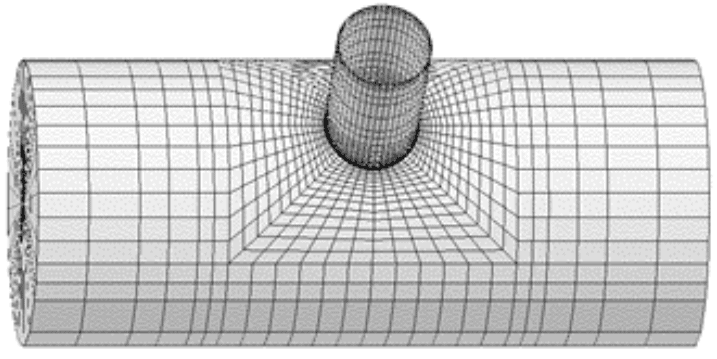 The example will create a model in NozzlePro using minimal user input (3 clicks and 4 numerical entries) to obtain useful information.  This article will also highlight a somewhat controversial aspect of how the B31.3 code treats reducing tees (which is expected to change soon).

One reason for the popularity of NozzlePro is that specified maximum vessel nozzle loads are usually too conservative and are often based on legacy company specifications which were issued before modern finite element analysis was widely available.  When it is impractical to keep piping loads on a vessel nozzle within specified values, qualification of the vessel nozzle using finite element analysis is often the preferred alternative.  This situation arises frequently with vessels built to ASME VIII Division 1 which does not provide explicit rules and equations for qualifying vessel nozzles.   It can also be used to obtain stress intensification factors (SIFs) for use in pipe stress calculations.

An unreinforced fabricated reducing tee (DN1800 x 600) is created with a total of 7 user inputs.  Dimensions of the tee are:

The D/t ratio of the header pipe is 114, it exceeds 100 and therefore outside the range of the stress intensification data in B31.3 Appendix D and B31J which state the validity has been demonstrated for D/t ≤ 100.

The template is very easy to use and only 7 actions to set up the model.

In total only 7 things that a user needs to tell NozzlePro before you can plot and run the model. 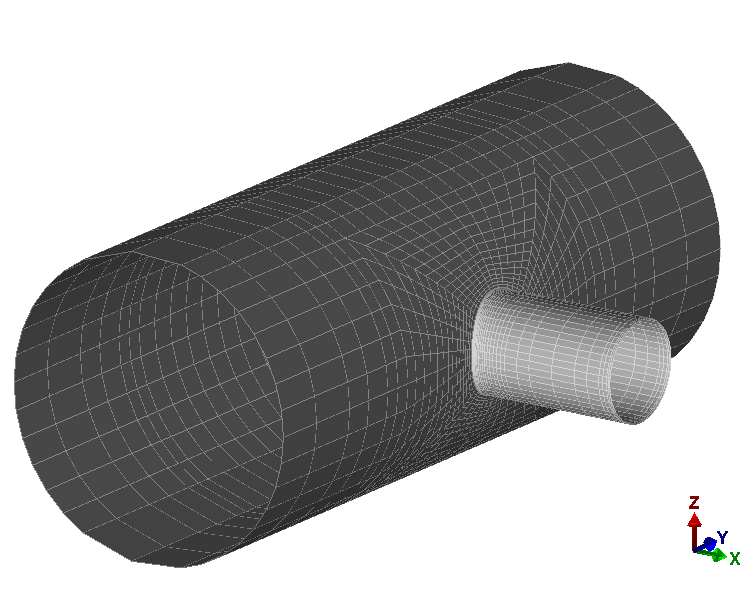 Note that no information has been entered regarding parameters such as pressure, mechanical loads, boundary conditions, mesh parameters, material properties, shell and nozzles lengths, axes orientation.

However, the model can be run to obtain some useful information – the SIFs and flexibilities.   These could be used in beam type piping model.  Notice for example how much higher the FEA calculated outplane SIF is compared to the standards B31.3 Appendix D SIF.

Good engineering practice when using any software is to verify output using a hand calculation.  Doing this using the formulas provided under “Unreinforced fabricated tee” from Table D300 of B31.3 (2018).

Earlier that it was mentioned how little user input was required. When no user input is required it often means that the software has to make certain assumptions regarding certain parameters.  In this case the default software setting is to calculate the SIFs for the branch (as opposed to the header). To do this calculation for the header it is necessary to check the following box under “Options” and rerun the model.

The NozzlePro-calculated B31.3 SIFs now exactly match the hand calculated values.  What should also be noted is how much lower the FEA-calculated SIFs are than those from B31.3 for header.

Note that for the B31.1 and WRC 329 methods there was no difference between the SIFs when the cylinder header option was selected.  This gives a clue as to why selection of “header” makes such a difference for the B31.3 SIFs….  How B31.3 treats a reducing tee fitting.  This is a slightly controversial aspect of B31.3 and has been pointed out by piping stress experts – readers wanting more on this topic can refer to p116-117 of Peng’s classic text “Pipe Stress Engineering” or the article here on this site.

The applicable section of B31.3 is 319.4.4 equation (20) which requires that an effective section modulus Ze of the branch be used

What NozzlePro is doing is calculating an equivalent stress intensification factor ie as recommended by Peng so that the calculated SIF should be used with the actual branch section modulus Zb:

This is as stated in the PRGik Manual.  The subscript r represents “run” which is the “header”:

These are the same values as calculated by NozzlePro for the branch with the minor discrepancy 0.01 probably due to rounding errors.

A summary of the results is provided in the table below.  It is worth noting that the branch outplane SIFs calculated by FEA are nearly twice that of the B31.3 Table D300 values – i.e. the out-of-plane branch stress calculated using Table D300 methods is non-conservative for this particular tee.  At the same time the FEA calculated SIFs for the header are way lower than the B31.3 values. Table D300 has come under scrutiny recently and a number of articles have been published to demonstrate its shortcomings.   It is expected that the 2020 edition of B31.3 will remove Table D300 and refer to B31J.

A lot of aspects have not been covered – in particular the use of the SIFs.  In addition, the software provided allowable primary and secondary loads which were not discussed.  These will be covered in future articles.

Robert has over 15 years’ experience in the mechanical engineering industry with proven expertise in mechanical and piping design. His most recent role was Lead Piping Engineer for INPEX on the Ichthys LNG Plant. Previously, he served as the client technical authority for the Chevron Wheatstone Downstream Project for all LNG plant piping and onshore pipeline, providing technical support on design, construction and commissioning.